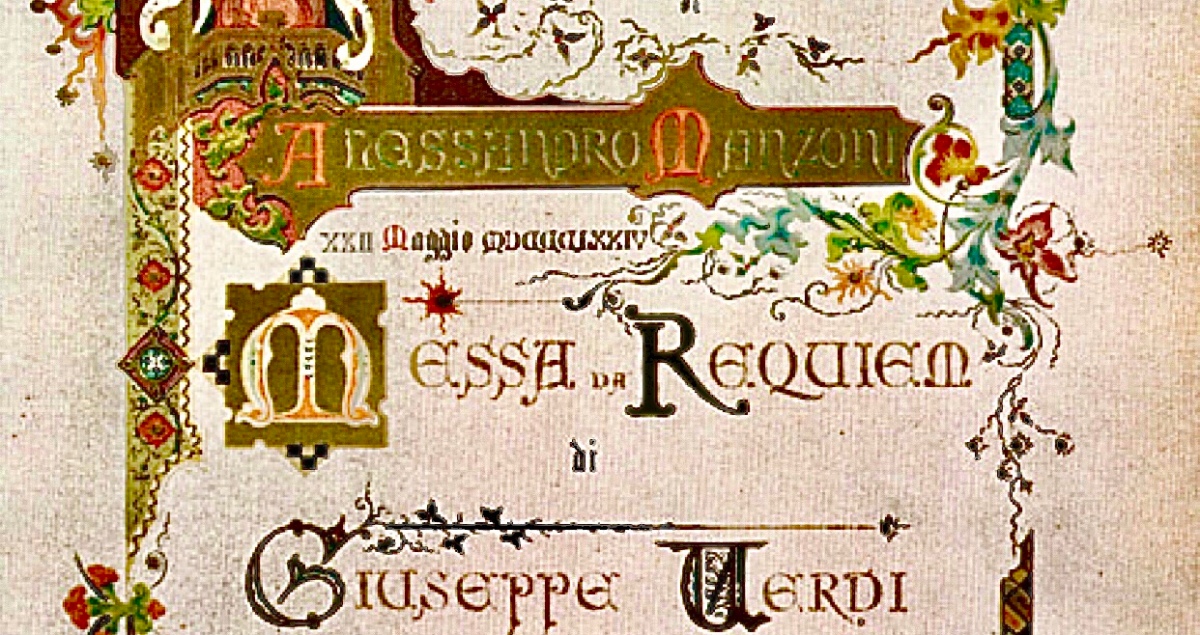 Life ought to be lived in such a way that even post mortem it may gain on relevance, depth, and dispensation. A requiem honors life, not death. It does not mourn an end but celebrates life in its passing.

This transition into independent breathing was being forced in 1958. A cesarean section was necessary, after which my mother nearly lost her life. Unlike some individuals who suggest having memories of their birth, as Yukio Mishima conveys it in Confessions of a Mask, I have no such recollections. Based on accounts relayed to me about my father being the only one holding me the first weeks, due to the fragile state of my mother, and information about my first flight to Cuba to meet and be in the arms of my grandmother, I do gather that my life began well. And yet, I imagine having been moved at that tender age by something that has brutally and lovingly touched me with enlightenment as an adult — Giuseppe Verdi’s “Messa da Requiem”, as performed in a few historic concerts and performances around the same time of my birth, and during my early youth.

Mine was the very year on which Herbert von Karajan directed this mass for the dead in Salzburg, supported by the voices of Leonie Rysanek, Christa Ludwig, Giuseppe Zampieri and Cesare Siepi. Just some seventy blocks from Harlem Hospital — where I first saw the light — in March of 1959, Bruno Walter conducted the same work at the New York Metropolitan Opera, with soloists Heidi Krall, Rosalind Elias, Carlo Bergonzi and Giorgio Tozzi. Von Karajan returned to Salzburg in 1962, then with Leontyne Price, Giulietta Simionato, Zampieri and Nicolaj Ghiaurov. Just as historically important was a 1967 performance for a movie production, directed by Henri-Georges Clouzot, at an empty Teatro alla Scala, performed by von Karajan, Price, Fiorenza Cossotto, Luciano Pavarotti and Ghiaurov. The same year, my beloved Sir Georg Solti and the Vienna Philharmonic released their rendition with Dame Joan Sutherland, Marilyn Horne, Pavarotti and Martti Talvela. In 1970, while I was starting to formulate expressions of impressions in words and music of my own, the young Maestro Claudio Abbado was at the Basilica di Santa Maria sopra Minerva to Rome, conducting his interpretation with no less than Renata Scotto, Horne, Pavarotti and Ghiaurov.

How I would have loved to be able to hear them live back then, despite knowing that they might have touched my young being too deeply and too early.

This thought lives beyond feasibles and common hunger. Placing such a musical masterpiece in the capacity realm of a newborn, particularly in comparison to the sounds of simple hymns and jingles which I heard then, is not sheer playfulness, though. In fact, it is a daring feat, not short from a threat. But, while my unusually high level of interest for classical music as a young man and into adulthood would hardly seem relatable to my perception abilities as a toddler, perception levels at birth cannot be underestimated. Yes, the body is tender but the soul is not, and it is hungrier.

Though not as part of those privileged mid-century live concert audiences, I have been in the midst of those performances well over one-hundred times — perhaps more than most of the lucky ones in New York, Salzburg and Rome that witnessed them physically present. Especially Abbado and von Karajan have endeared my soul and contributed to the expansion of my music understanding, after watching them conduct, while minding their breathing and mannerisms aplenty. The same hand movements, the same facial expressions, the same presence of von Karajan during a performance two years before his death in 1989, are his in performances of the 1950’s. The confidence that the 37-year-old Maestro Abbado embodied in 1970 in Rome, is manifested in joy and lightness during his concerts in the Teatro alla Scala and in Lucerne, just two years before his passing.

Certainly, a newborn needs not know the name Luciano Pavarotti to be touched, shaken or awakened by his voice. A newborn needs not know names at all. Unaware of the singer’s identity or importance, Pavarotti’s voice would have resounded in my spatial surroundings, found its way through my pinna paths, and gently drilled its way into my inner ear, into my whole body, with the natural resonance, supple tonality and distinctive vocal character which emanated from this master of the voice and singing. The gentle and precise intonation which was so his to evoke, gets attention from almost any being on perception mode.

Leontyne Price’s name is just as irrelevant. Her voice reverberates in the newly born body as intensely as in the departing one. Standing as a fortress, hands together intertwined, her voice streams as strong, distinct and colorful as bells from a cathedral telling time to believers and non-believers all the same. A clear sign of patience is hearing her phrasing and seeing her face expand. Think of the iconic three minutes following her “O patria mia” on January 3, 1985, at New York’s Metropolitan Opera. Acoustically, the aria had ended. The very last note had kept eyes and mouths wide open for some 13 seconds, before she would shut down every sound and movements on her part, shifting abruptly into monumental stillness, partly acknowledging pro forma the loud manual and vocal reception of praise from those present, while simultaneously gathering in body and spirit all that she had taken in and delivered on the stage and in life, up until that January third.

Up until 1985, I probably knew one single operatic music excerpt — the “Bridal Chorus” of Richard Wagner’s opera Lohengrin. Now, as an adult who has spent almost forty years listening to live and recorded classical music and opera, I am able to capture many differences which I did not notice when I began perceiving music and sounds in the 60s and 70s. At least I recognize much more than composed sounds; I notice differences between interpreters, hear the varied dissection of a passage, and can tell a different person at the piano, almost as easily as recognizing my mother’s voice from my father’s.

Beyond what a composer could ever control and may even intend with a piece, two aspects are relevant for the individual listening to a music piece, especially in works with such depth and complexity as Verdi’s requiem. There is architecture, in which the acoustic conveys music, and there are the individual states of mind and soul.

Many music lovers have had the privilege of being in spaces built specifically for listening. In Vienna, a jewel for acoustics is the Musikverein. In 1876, Richard Wagner opened the opera house Bayreuth Festspielhaus for the performances of his works of music drama. Fifteen years later, New Yorkers got Carnegie Hall. These are all architectural works of art and science for acoustic excellence.

Architecture equally includes the individual body. Everything we hear is dependent on the projection and reflection which take place based on our facial structure, along with the pinna as the individual projection and reflection part of the body for listening, commonly known as the outer ear. Beyond the relevance of the physical listening space, is the condition under which we absorb metaphysically, which, in turn, brings about truly physical sensations.

Recently I was once more in deep listening, as a fellow cigar smoker looked at me and gently signaled his interest in making some type of request. I placed my headphones down and he proceeded to ask what I was listening to. After I responded, he shared that he has never spent any time listening to classical music. His words and facial expression revealed some type of hunger, paired with reluctance. Many thoughts came to mind and I tried to share as many as possible with him. I said much, feeling like an impassioned missionary, rejoicing in imparting to a fellow human, all that lives in mind, body and spirit, when I listen to this music. He began and never stopped asking for examples. I covered much ground. There is so much in this music — in individual voices, body movements, rhythms, passages, subtleties and intensities, styles, instrumentation and orchestration frameworks, brutality and challenge, transcendance and relaxation — so much that I had plenty of points and music excerpts to share with him. Then I mentioned a current thought for an essay, in which I reflect on the common intangibility of music, versus its sphere of physicality. I offered him my headphones and played the example of soprano Diana Damrau as Candide, singing Leonard Bernstein’s “Glitter and be gay”. Though I have seen the video plenty of times, I had never watched it without sound. While he listened and watched, I absorbed in silence, and cried, admiring the many sides which make her a talented music persona. My chest expanded, my stomach sank, tears were inevitable.

What happens to a newborn when touched, impressed, moved by the depth of music but without the release of tears? Where does then the intensity land? Indeed, digesting the depth of Richard Wagner, Johannes Brahms, Giuseppe Verdi, Sergei Prokofiev, Krzysztof Penderecki, Arnold Schoenberg, Alban Berg, Milton Babbitt, Frederic Chopin, Franz Liszt, Henry Cowell, and the likes, might be a challenge to the soul of a newborn, as drugs would be to their biological constitution. However, I do believe that such a start enables us to appreciate the later discovery of Tiny Tim’s “TipToe through the Tulips” with a different maturity of heart and intellect for sound, music and acoustics.

Immaterial growth is the essence of life. Therefore we have various abilities at our disposal. Perception and absorption through the palate, inspirational interpersonal relationships, and listening to composed and not composed sounds — these are perhaps the greatest. Such experiences enable and sustain our physical being, with each perpetual fragility we may treasure. They bring about maturity, and impregnate our soul, to the extent that they stay with us once they touch us, helping us in understanding the depth of living and serving, and not just to make us aspire redemption, or entering heaven.

While starting on a personal account mode, this is not based on the wish of a single individual. It is an exercise on the power of being lovingly and yet brutally touched by the immaterial, to generate wealth for the gustatory and mental palates. It is an appeal to the spirit, to feed for depth. The contemplative idea of an individual listening to melodies composed for a body departing into ether, while self arriving from ether into a new body, may well be a warmer, more familiar welcome, called birth.

This site uses Akismet to reduce spam. Learn how your comment data is processed.